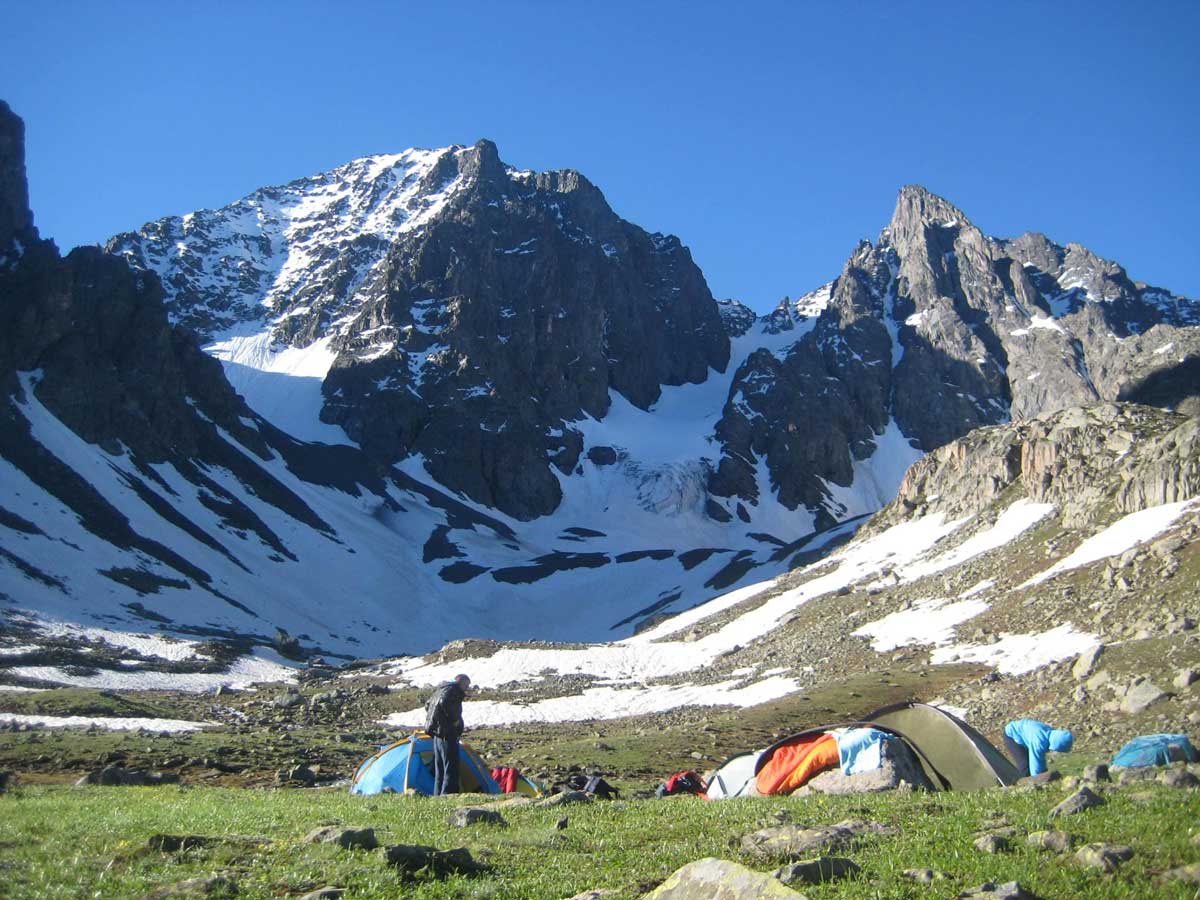 Turkey Geography Institute Kaçkar Mountains in Within the field work for the Rize - Çamlıhemşin around 03 Ağustos - August 12, 2007, between the studies in the Eastern Black Sea Mountains, especially around Kaçkar Mountains and the glaciers for their research and geomorphological observations were geographically. 7 persons geography composed of undergraduate and graduate students, the team (Cihan Bayrakdar (Team Chair), Ergin Canpolat, Cem Ardabil, Mehmet Emin Sönmez, Engin I don 't, Irfan Akar, Ebubekir Güleç) and Kaçkar Mountains and close around the study; 1. day as a team set off from Istanbul at the noon hour arrived in Rize are kept there by a vehicle Çamlıhemşin'e and Ayder'e was adopted. Located on Çamlıhemşin-Ayder road tar entering into the valley on the east-west direction in the valley normal faults formed due with 300 m water fall Misty waterfalls are investigated. Ayder plateau after the camp was established. 2. day camp in the early morning, separated from the plateau above Ayder Kavron Plateau has been approached by car. Made final preparations at the plateau towards the B. Marine Lake was set off. On the way they say about the features of physical geography of the region has been generally and evening camps to be established B. Marine Lake has been reached. Located on the shores of the lake near the sea 3.DAY B. lakes and other circus to create their geomorphological made about the course was set off, and the ox is over 3500 m in bed mevkiinde acid has been there. The same day on the slopes Kaçkar Mountains to the Great Glacier and the glacial ice Erinç have been made about the structure of lessons. Switched to the lake bed was Derebaşı 4.DAY oxen along the way courses were made about the formation of glacial valleys, where the camp was established. 5. day rainfall, challenging trails created by 5 friends from our team of 8 people because of weariness Y. voluntarily with Kavron Plateau and from there back to Istanbul reached without events. 3 person team, with the remaining Kavron acid (3600 m) is overcome and move to the southern slopes of Mount Kaçkar night, the defendant has established camp in the valley pastures. Set out very early in the morning before Day 6 Sea Lake to check out the route from there to the summit has started. 13.00 waters have reached the summit. Institution name (TCK), signed the summit book and up to 1 hour stay at the summit into whether the route was converted back. Defendant has been collected and spent the night camping out plateau. 7. morning to set off the road by the defendant in the neck plateau about the glacial valley polijenik courses can be done in the town has been reached there at noon Şenyuva Ispir was adopted. The same day evening by bus to Istanbul to Erzurum has been passed has been set out. 8. day at noon to Istanbul has been reached. During the field work planned 11 days without work 9 day events have been completed successfully. Arş.Gör.Cihan BAYRAKDAR TPC Member of the Board align=center> New Trips Click